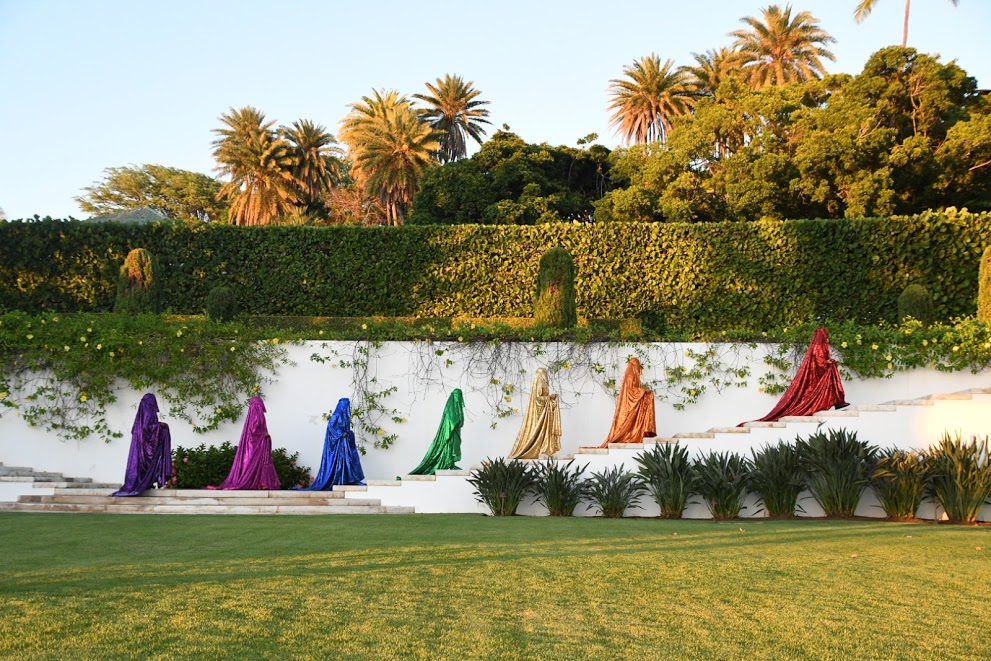 The chador is a staple in the Muslim woman community, specifically for those with South Asian and Middle Eastern heritage. While chadors are usually worn to cover Muslim women’s bodies, Anida Yoeu Ali wears a red one to unveil racist and Islamophobic criminalization of Muslim bodies around the world. For Ali, The Red Chador represents the boldness of womanhood, the meaning making women endured while facing persecution, and the essence of the Islamic faith.[2] Like many protests and rebellions before it, The Red Chador serves as a social statement that, just by its mere existence combatted the systems it was made to fight.

The color red draws on the ideas of audacity, fire, rage, sex appeal and blood. For Ali, the work, on one level, counters the rewriting of history during 1887 through the mid 20th century when French colonialism in Southeast Asia ravaged communities, causing the rape and killing of thousands of people.

“Artists need to create to the same scale that society has the capacity to destroy.”

Ali is a performance artist. Ali says she is a creative who seeks to perform between the here and there. Here and there being any set of destinations — be they in the physical world, ancestral realm, or spiritual atmosphere.[2] Her work elicits your participation, can happen at anytime, anywhere, and with anyone. Ali’s artistry unravels, heals, triggers, and provokes. Observers will attest that her work is best appreciated in person during a live showing. The Red Chador is a masterpiece of shimmering opulence that is a hallmark in Ali’s repertoire. 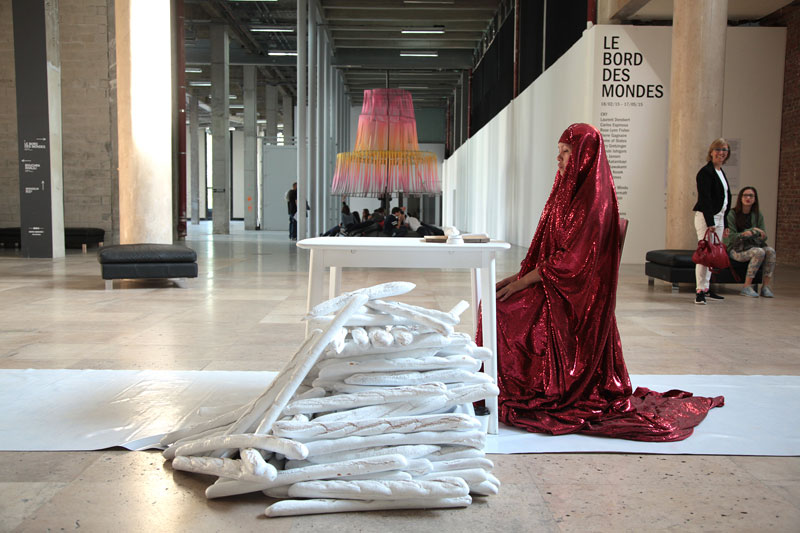 Making her debut in 2015, The Red Chador has since sparked dialogues on social justice through her wake in the US, Asia and Europe. One of the earlier exhibitions of The Red Chador took place at the Palais de Tokyo in Paris as part of the “Secret Archipelago” exhibition, which highlighted artists who had not yet received international recognition. The exhibition commissioned 40 new works from artists to reflect on contemporary Southeast Asia, including Ali who engaged with the legacy of France’s colonial past in Southeast Asia in which the French violently suppressed established cultural forms. France’s mission was “to ban the presence of the burka under prevention of religion symbols in public spaces.” Ali was also very much aware of the contemporary ramifications of this past, including the lack of data on race and gender in France, which only furthers the lack of national conversations and policies addressing such issues. For Ali, The Red Chador’s presence in “Secret Archipelago” was meant to stir such conversations.

During the exhibition, The Red Chador sat firmly in the middle of a room in the museum. Attracted by her fiery luminescence, museum visitors stopped to interact with her. The Red Chador would make a demand (written in French) to the visitors as a form of reparations.

“I want the audience to respond, but I never know how that response is going to come back to me.”

If the demand was met, then the victim (for which the artist substituted a French baguette [3]) would be saved. If the demand was not met, then she would behead one of 99 baguettes to both inject an element of humor and to reflect the use of the guillotine as execution method originated and popularized in France.

The Red Chador in Seattle 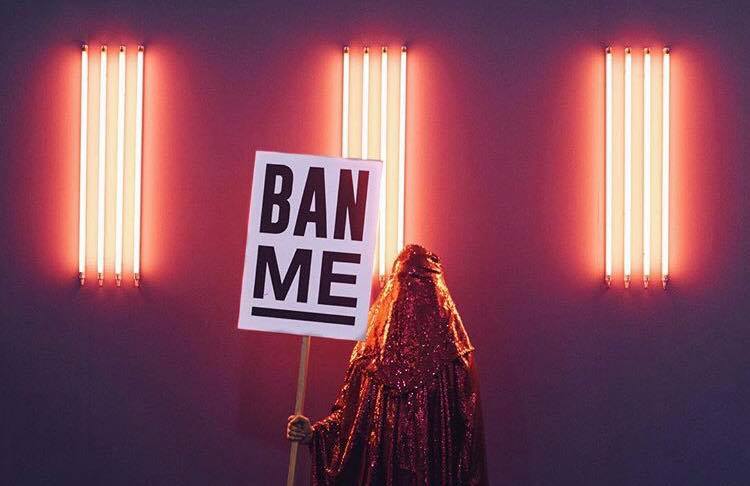 The Red Chador continued her world tour to the Widener Gallery in Hartford, Connecticut, the Asian Art Museum and SF Camerawork in San Francisco in 2016. The day after the 2016 US Presidential election, the crimson luminary walked through the Seattle streets donning a sign that read “I am a Muslim” on the front and “Ban Me” on the back. Protesting Trump campaign rhetoric and “Muslim Ban,” The Red Chador also directly referenced the protests for economic equality led by Dr. Martin Luther King in Memphis, Tennessee in the 1960s before his murder through the use of these signs. Islamophobia was unfortunately not relegated to one party and was also directed at The Red Chador during a Bernie Sanders campaign event in San Francisco earlier that year. Throughout 2017 The Red Chador was present at the Imagine 2037 festival in Edinburgh, Scotland, the Art Central Fair in Hong Kong, the King Street Station in Seattle, and her final appearance at the Kuala Lumpur Biennale in Malaysia.

“My work is about figuring out that spiritual turmoil and putting together religions to create a new hybrid presence.”

The Red Chador was last seen in the Tel Aviv airport in December 2017. She was not even set to make an appearance in Israel but was resting and joining a voyage from Malaysia. By this point, she had become an international figure, so people were aware of her impact. According to Ali, the mere essence of The Red Chador’s energy in Israel was a threat to the state’s anti-Asian and Islamophobic (particularly Middle Eastern and South Asian) stance. She went missing at the Tel Aviv airport.[1] Her disappearance was enforced similar to countless women of color in the past and present at the hands of European imperialism.[1]

The Red Chador at the Smithsonian

Ali’s work in bringing The Red Chador to life required years of nurturing a coupling — a maternal energy. When the artist and The Red Chador worked together their bonds created a synergy that was felt by anyone in their presence. The coupling was transcendent of time and space, capable of touching a range of audiences.

“As a woman of color, and often in communities of color, we like to roll deep. We like to feel protected.”

Ali mourned The Red Chador throughout 2018. For Ali, The Red Chador’s presence, like any living thing, was felt beyond her physical burial. In November 2019 she was reincarnated, but with her new rainbow brigade. This rainbow brigade addresses not only Islamophobia, but also homophobia in the Muslim community. This team of women made their first appearance at the Shangri La Museum of Islamic Art, Culture & Design in Hawai‘i, which was one of the first states to openly state against Trump’s actions as president. With plans to have 99 total Chadors (with 99 representing the number of names of Allah) telling their stories around the world, The Red Chador and her newfound team continues on her quest to reclaim the humanity of Muslim women, while sparking a global conversation.

Anida Yoeu Ali is a performance artist and political agitator who has used her artistry to challenge hateful conceptions of the existence of people of color and women while addressing religion, homosexuality. Ali is immigrated from Cambodia when she was a kid with her parents. Using her Islamic faith to drive her work, she leans on hybridity and intersectionality to confront racism and hegemony with a silent, direct presence. Originally sharing her work through spoken word, Ali has always felt the need to highlight her experiences as an Asian American woman in the United States. She knew her words were resistance, and fought the oppression she found herself in. She shifted her medium in the mid-2000s after US citizens became more aware of the Muslim body and presence due to 9/11 and traveling to perform spoken word in difference Asian countries. She realized in those venues in India, Vietnam and Thailand, while the audience members could feel her energy and emotions, they did not connect with the verbal message.

Since focusing on performance art, Ali has created numerous pieces to draw attention to the marginalization of Asian womanhood. From the Buddhist Bug, White Mother, 16 Minutes, The Red Chador, Ali is channeling the energy of women in multiple diasporas. She uses her work to center that existence evokes emotions from people, be they positive or negative. 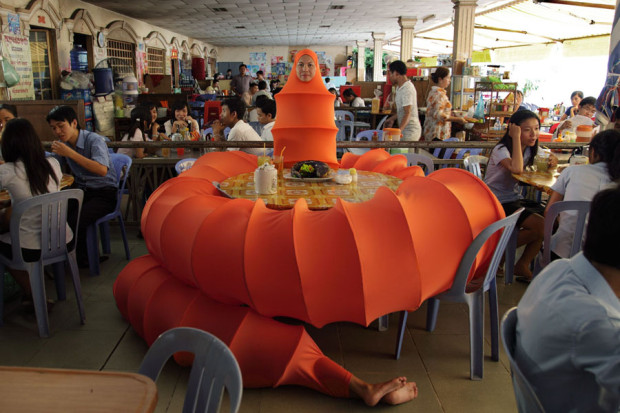 Buddhist Bug in the Campus Dining 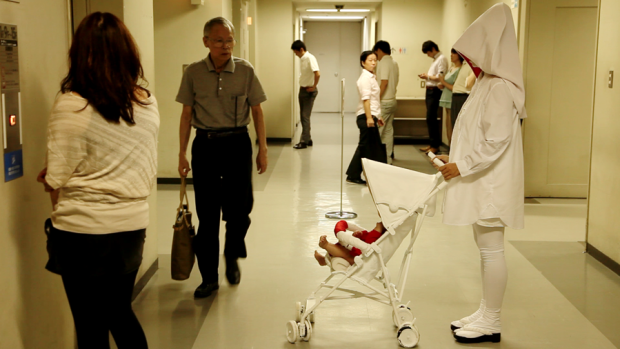 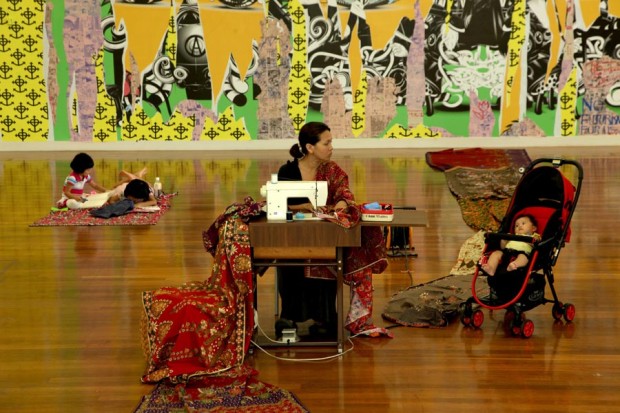 Anida Yoeu Ali earned her BFA from the University of Illinois and her MFA from the School of the Art Institute Chicago. She is a 2011 recipient of the US Fulbright Fellowship for work in Cambodia, a 2012 finalist for the White House AAPI What’s Your Story Video Challenge, and a 2013 recipient of the Center for Asian American Media Innovation Fund Award. 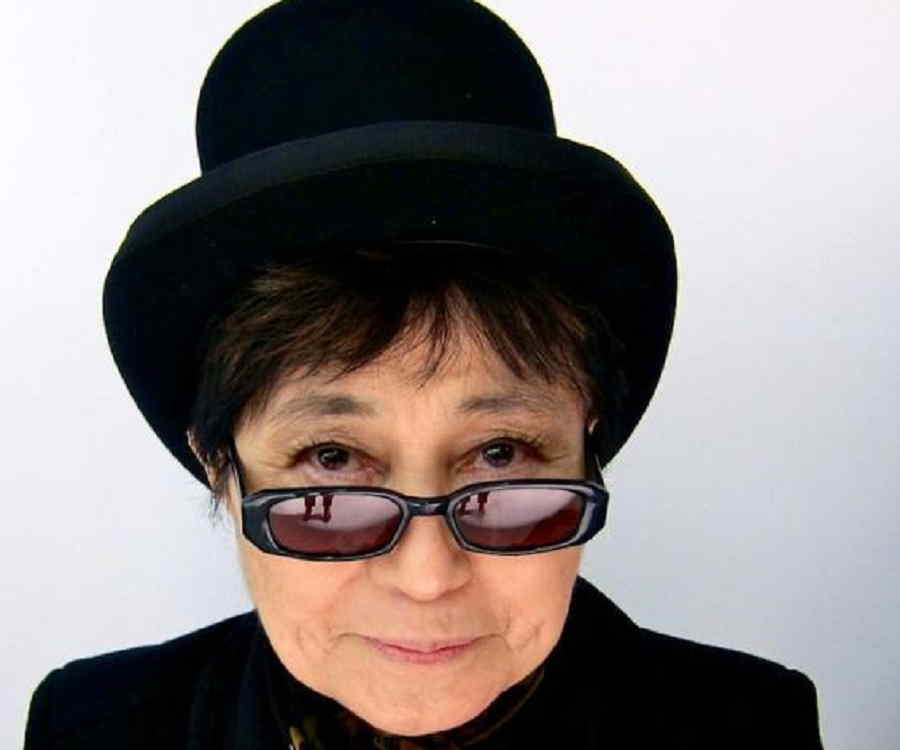 [1] Anida Yoeu Ali (artist) in discussion with the author, August 2020