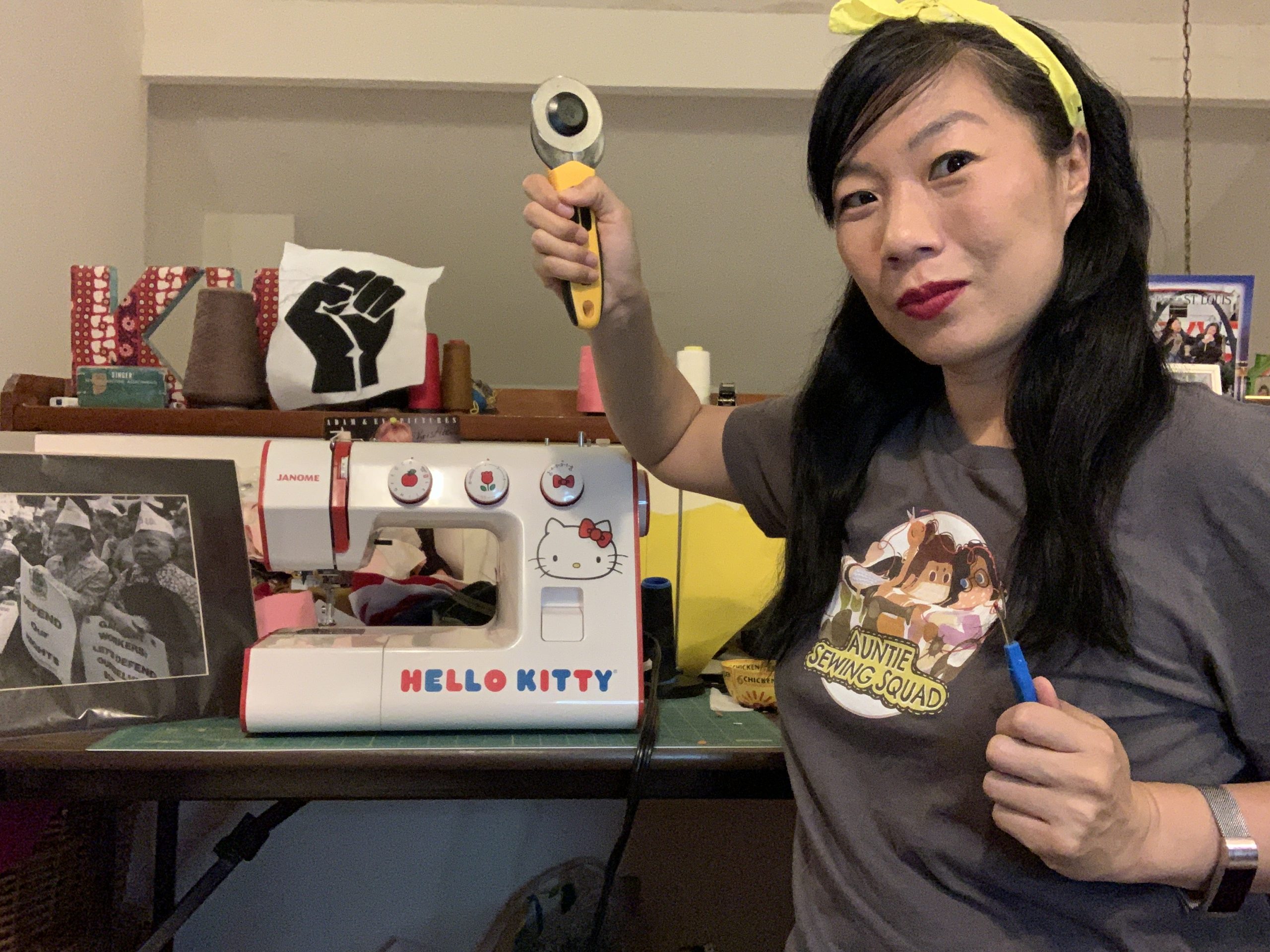 While everyone else was working on their sourdough starters during the pandemic, I was screaming at people to feed me. This is why I don’t have some innovative comfort recipe to contribute to this recipe book.

I am the “Factory Overlord” of the Auntie Sewing Squad, a national volunteer group of hundreds of mostly WOC mask makers who literally are running a shadow Federal Aid agency to put PPE on essential workers and very vulnerable communities. Our Aunties are college professors, award winning filmmakers, executive directors of non-profit organizations, healthcare workers, scientists, and award-winning artists, like myself.

Forget images of the quaint meditative seamstress at her machine. Running an amateur medical supply company in the absence of any government leadership turned me into Jack from Lord of the Flies. Avalanched by unending mask requests, onboarding new sewing Aunties every hour, making death defying post office visits, and trying to find ¼” braided elastic during a lockdown created such a mental tsunami that I hadn’t noticed my period leaking through my pants for two days.

I screamed for help online: “If you can sew or cut, step up. If not, feed the ones who are.”  It’s not that the Aunties are food insecure, we just need to know that while the rest of the world was baking sourdough bread and watching Netflix, we exhausted soldiers stopping genocide from our home sewing machines hadn’t been taken for granted.

If there was ever a more complicated scheme to extort non-sewing friends for pizza and baked goods, this was it. Caring Aunties and Uncles sent us care and food offerings to fuel us for the sewing of 50k+ masks (at the time of this writing). The labor of sewing has become our currency, scarce to find fabric and elastic more valuable than the cash that buys it.

Three months into the pandemic, factory-made masks have surfaced across the market but there is still a need to sew masks for First Nations, day laborers, farmworkers, Black Lives Matter peaceful protestors, the incarcerated, and very poor communities of color. Our masks have been smuggled across the border into Mexico to migrants seeking asylum, some have gone as far North to Six Nations Reserve, which is Iroquois Confederacy in Seneca, NY. The Auntie Sewing Squad has grown to include a college class, a kids summer camp, multiple relief vans to seamstresses of the Navajo and Hopi People, a book, and most importantly, hundreds of new friendships grounded in a heart to heart connection we made with each other in the most fraught time in history.

We are contributing a pattern designed by Van Huynh, named after him by all the Aunties. We had learned that a free pattern we had been using on freesewing.org named the “Fu Facemask” was actually named as a racist honorific by the Belgian patternmaker who literally googled “Asian names that start with F” in order to name this pattern that would honor “Asians for being the first to wear masks”.

Van Huynh is an incredible human with a remarkable life story who also is a tailor who had modified the racist-named pattern.  He has been sewing with his mother, a garment worker, while also working with his lawyers on his pardon– all during quarantine.  Because Van is an actual incredible human, not a googled Asian sound, we name this mask after him.  We now refer to all two piece per layer masks as “UVH” or “Uncle Van Huynh masks.”

Auntie Sewing Squad is a national network of people of all genders who have turned our living rooms into “sweatshops” because of the failure of the Federal Government to provide proper PPE to essential workers and vulnerable communities. We give our time to make masks to stop the spread of Covid-19, specifically in the most vulnerable of communities with no access to masks. In our working group, we work towards goals posted by our leadership and other Aunties. We believe in a system of community care and having a direct connection to our recipients. We share resources on patterns, fabric and elastic. The group was started by performance artist Kristina Wong on March 24, 2020 as a forum for sewers to support each other in the sewing of masks, it has since ballooned into a shadow Federal Government Aid Agency supporting communities that have long since beared the brunt of systemic racism and violence—First Nations, undocumented immigrants, day laborers, poor communities of color and migrants seeking asylum at the border. The Squad’s work has expanded to include relief vans to the Navajo Nation, and support to create “sewing factories” on the Navajo Nation, Standing Rock, and Rosebud. We also are a college course at San Francisco State taught by Grace J. Yoo and have a kids summer sewing camp. In 2021, the University of California Press published The Auntie Sewing Squad Guide to Mask Making, Radical Care, and Racial Justice with a foreword by Kristina Wong, the book was edited by Mai-Linh K. Hong, Chrissy Lee Yao, and Preeti Sharma.

Kristina Wong is a performance artist, comedian and elected representative of Koreatown, Los Angeles. When her national tour of “Kristina Wong for Public Office,” about her run and win for local elected office was sidelined by the pandemic, she pivoted to touring “Kristina Wong, Sweatshop Empire” on Zoom about how in ten days she went from out of work artist to the Factory Overlord of the Auntie Sewing Squad. In the “Before Times,” Kristina toured her award winning solo shows internationally, was a guest on late night television, and created the kids web series “Radical Cram School.”

Van Huynh I’m a 42nd-year student of Life. I was given birth on a small island in South Vietnam where my journey began. At 4 years old I escaped with my mom and sisters to… somewhere, anywhere.. safe. It seemed to me that we never found it because we never stopped searching – … Japan, Florida, San Francisco, all over Southern California. My family finally stopped moving; maybe they found what they needed, but I didn’t. I continued to search, for acceptance, for my Self, for home, for purpose. I followed this calling right out of school, into the streets, in with a lost crowd, into the courtroom where I was given a multiple-life sentence at the age of 16. I continued to follow.. right into prison. I was practically condemned to take my last breath in prison, but 25 years later, I’m out. It’s not quite freedom because I’m ordered and waiting to be deported to Vietnam whilst on federal supervision and state parole.

As a teen, the judge gave me a slow death sentence, teaching me to continue the cycle of hate, vengeance, aggression, and violence. I did this for many years in prison, but social justice workers broke that cycle for me with love and kindness – turning that death sentence into a new opportunity to heal our communities. I have learned my true power and have found my purpose by knowing and accepting myself, my TRUTH. The Auntie Sewing Squad have found and accepted ME, and together we’re searching and finding ways to spread love through ACTION.

Pattern layout is by Chey Townsend.