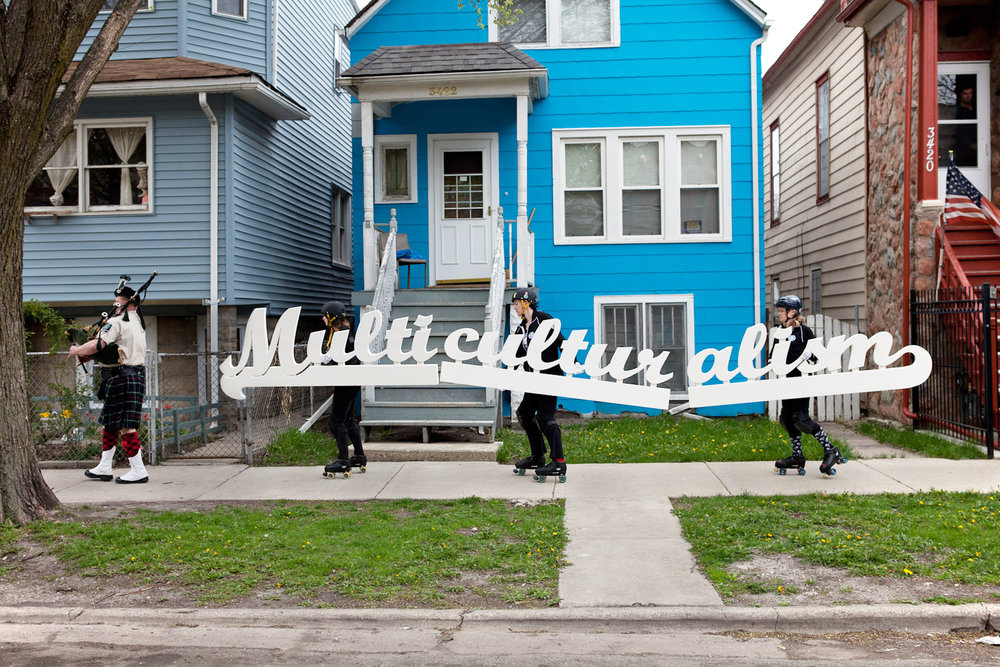 Spotlight: Larry Lee – My Aim is True… & In Ascending Order…

Spotlight: Larry Lee – My Aim is True… & In Ascending Order…

Satire and color are at the center of Larry Lee’s artwork. Continuing his Orientalia thematic (stylized reproductions of stereotypical Asian cultural forms to explore the politics of Others’ voices) Lee reimagines the shuriken (ninja star), a concealed weapon that Japanese warriors use to divert and mislead their opponent. Lee’s work My aim is true (for Naomi Nordstrom) features his work in almost pop-influenced large-scale format of this seemingly well-known weapon that is in fact meant to be more warning than harmful. More tellingly, they also serve as the focal point of his upcoming Stars and Stripes exhibition. 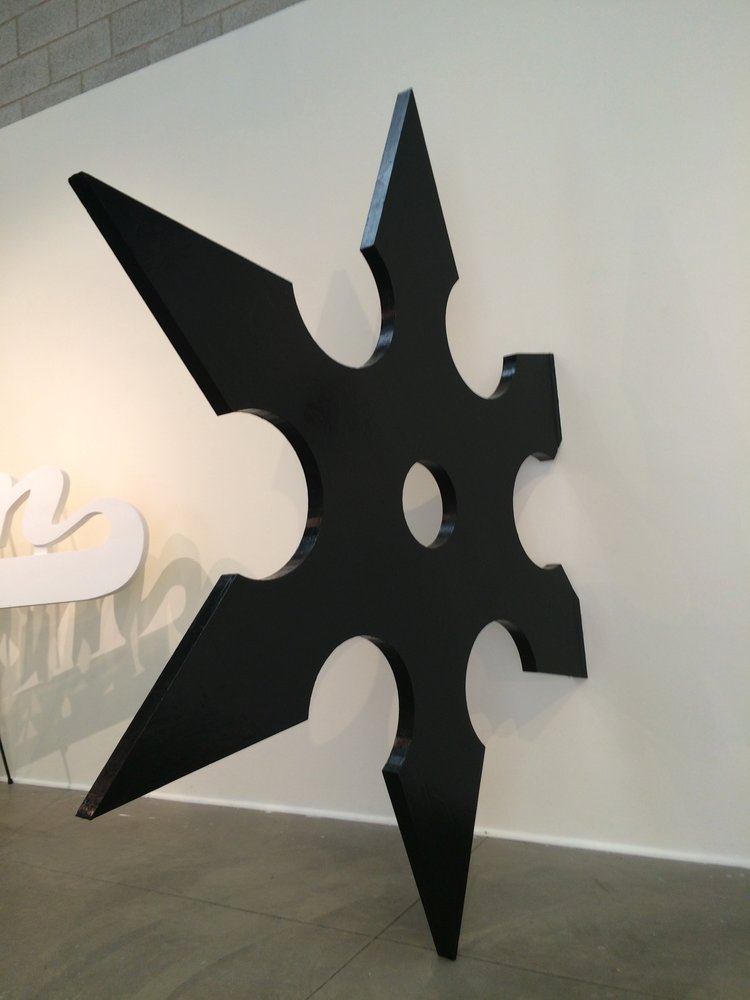 Lee continues addressing the racial issues with his sculpture work In Ascending Order of White, Yellow, Orange, Green, Blue, Purple, Red, Brown and Black, where he places a tall two-step staircase as the works’ backdrop with a rainbow color scheme. In this work, he pays homage to the colors of the belts earned in martial arts while subtly addressing anti-Blackness in many communities. But in this work, brown and black is seen as the highest achievement. Lee uses humor all the while knowing that his contribution to the conversation on culture is serious and has an importance in changing the ways that people think and feel. 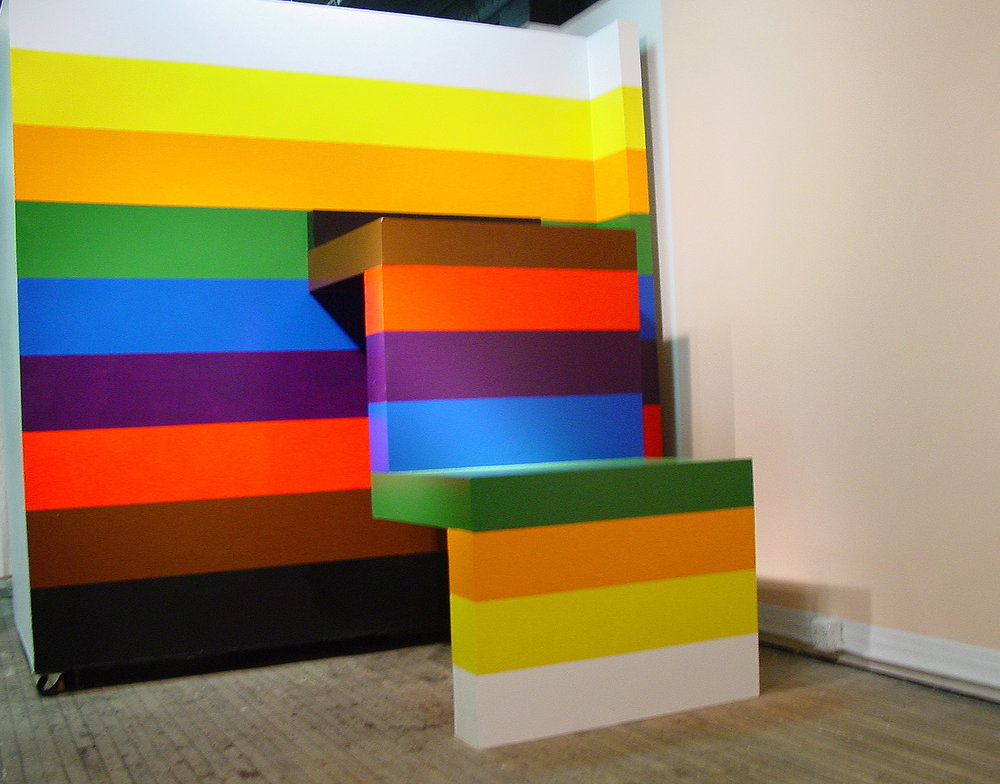 “Martial arts as something akin to an educated process and I want to call that into question. And how it instills a cultural conditioning.”[1]

The shuriken has been used for centuries by Japanese swordsmen dating back to the sixteenth century. Serving as a distraction, the discrete weapon would buy time for fighters when trying to one-up an opponent. Their small size (no larger than 4 inches) were perfect for concealing in garments while engaging in intense sword fights. They are currently popularized in kung fu movies and comedies where they are used as star-shaped darts — as a scare tactic more than a diversion. With his six-foot tall shuriken in My aim is true…, Lee is asking observers to let go of their previous conceptions of the weapons to introduce them to a new, lighter perspective. In fact, Lee has sculpted the four-inch thick enlarged black ninja star completely out of Styrofoam. So, like their original use, they have become once more, virtually harmless.

In the work In Ascending Order… Lee has taken another stereotypically Asian theme, martial arts, and reimagined the most recognized part of the training uniform, the belt. The uniform, a keikogi, is typically a solid color loose-fitting top and pant suit that is adorned by a colored belt. The belt in martial arts is part of its ranking system, with the color of one’s belt indicative of level of expertise and skill. Lee has highlighted the martial arts belt in his large-scale installation, but instead as larger-than-life stairs. The staircase is placed against a backdrop of these colors but inverted with the black stripe at the base and white at the top. Each color is a horizontal stripe across the width of the staircase, starting with white at the bottom, then yellow, orange, green, blue, purple, red, and brown. At the top of the staircase sits a lone black step, smaller than the others, but still sitting atop the others. 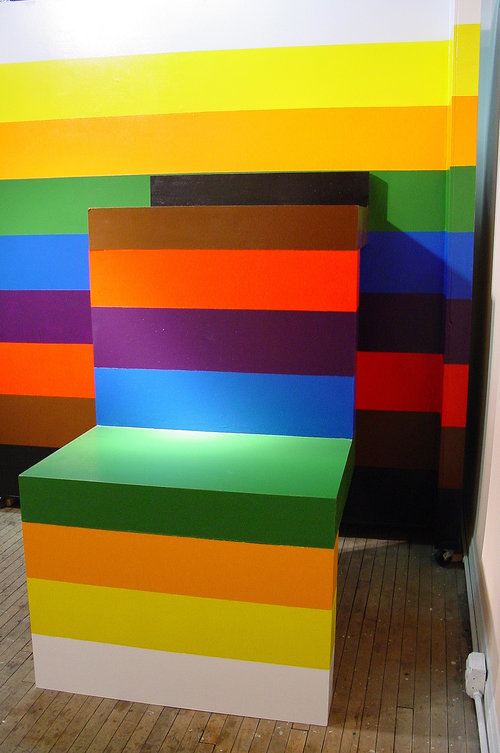 Inversion is a theme in Lee’s work. In My Aim Is True, Lee zooms in on the shuriken to have the audience look at the weapon from a “worm’s eye perspective.”[1] He seeks to flip the world upside down to rethink how liberation would really look if we had a different perspective. Lee sees martial arts in multiple dualities. Martial Arts has the potential to be used for violence or for pure enjoyment while scrutinizing what we learn versus what we are taught, as well as what deem as generosity or not. In his work My aim Is True, Lee’s aim is to build an army of ninja stars to form a constellation that will illuminate the imaginations of observers. The constellation will serve as a brighter image for our human existence. With each life-sized ninja star partially placed in a way already, Lee knows that the sculptures will be the needed distraction from our current incongruous human state into one where we are all free.

My aim is true (for Naomi Nordstrom) 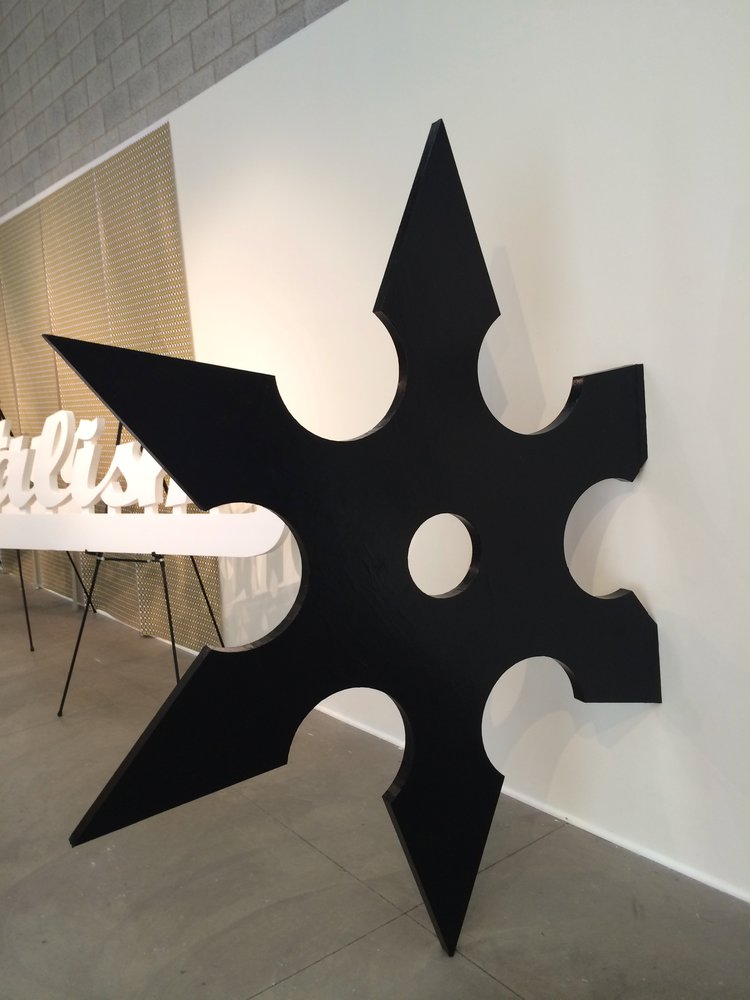 Most people are taught that light brings joy and new beginnings and darkness brings dread and mystery. In fact, for many darkness means freedom. We have heard stories of North Koreans who have escaped in the darkness of night from the their disenfranchisement. In the night, we know of stories of Black slaves who started their escape to Canada.[3] Darkness also has light. Since the middle of the second millennium, white western Orientalists and Africanists pushed the idea of “black” as an evil hue. Larry wants to flip these perceptions on their head, by highlighting that a martial arts student has not reached mastery until they are a black belt. They have not freed themselves from studenthood until they receive that black belt. In Larry Lee fashion, he uses In Ascending Order… as an indirect-direct way to say that we have been conditioned to see whiteness at the top of the color spectrum, while other colors fall in line, with black being the last in tow.

“I wanted to see what words mean to artists, especially of color”[4]

For Lee, it is important that he is addressing racism in not only western and white societies but also within different communities of color. He describes the piece as a waterfall, with the colors cascading up the wall and down the stairs. This piece shows the rainbow of hues human existence fills, but that continues to show a disdain towards Blackness, a colorism that undergirds anti-Blackness within our respective communities of color. With one vivid sculpture, Lee makes us question and recognize anti-Blackness in both white and People of Color communities. Much like a sensei, Larry Lee is teaching us to critically think about the real-life lessons ingrained in us as we enter his arena of artistry. 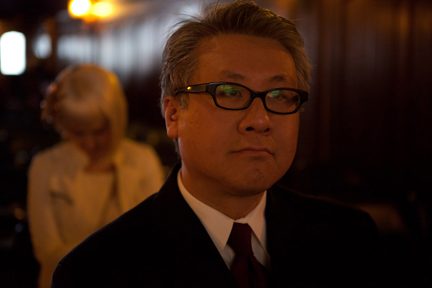 Larry Lee is a sculptor, painter, performance artist, a multimedia artist, professor, and independent curator. He is a jack-of-all-trades and master of none. He uses his wit and puns to capture deeper meaning in every artwork he completes. He hails from Chicago, Illinois but was raised primarily in South Carolina. A descendant of Chinese parents who immigrated from the country, he places his identity in the forefront of artistry and teaching. Lee was originally after an art teaching career, but that changed when he entered his work into an art competition in the 1990s. From there he has been rebuilding “Orientalia” or stylized reproductions of cultural objects.[4] He creates art that is symbolic but also disputes the misconceptions of Asian American identity, while throwing puns at the benevolent dialectic Asian American men find themselves stereotyped under.

As a creative who views all his art as part of his legacy, he recognizes the value in every portrayal and symbol he has reimagined. Lee does not believe in originality but thinks of myself remaking as part of a greater artistic genealogy. He has built a reputation with his work that is often a double entendre. This work includes the Lao Sze Chaun series, The Seven Faces of Dr. Lar, Imitation of Life, Cooking the Books, The (Un)Timely Death of Multiculturalism, and The Artist Speaks. Lee has curated exhibition with numerous artists under his company Molar Productions and developed a “cooking” show entitled the “The International Chefs of Mystery.”