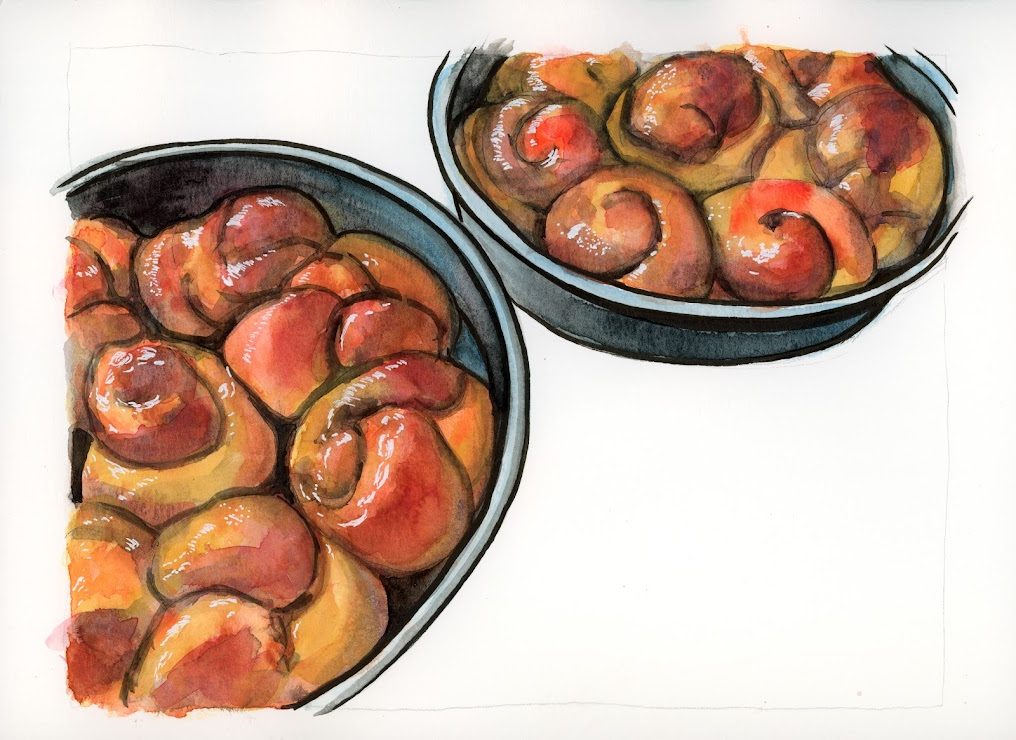 My first encounter with baked goods was prenatal. It was California in the 1980s, and my pregnant mother went to the office every day, where people smoked indoors, and a cloud of smoke always hung over her cubicle. My mother escaped periodically to rest on a vinyl chaise in the ladies room, and once a day at 10 am, my father fetched a cinnamon roll for her from the food truck outside. My mother never had a sweet tooth or much of an appetite at all, but now she ate for two, and this large, soft, sticky pastry became an essential ritual.

As a child, I was introduced to other American pastries and sweets. On Saturday mornings my parents walked me and my sisters to the local donut shop, where we pointed at our favorites in the glass case: a buttermilk bar, a glazed twist we called a unicorn horn. At Sunday School I received, with the reverence accorded to the Holy Communion, a handful of Mother’s Circus Animal Cookies and a Dixie Cup of bright pink punch mixed from powder. In the public school cafeteria I watched classmates unwrap the Twinkies and Ding Dongs my parents refused to buy. My parents came from Taiwan to the US as grad students in the 1970s, and learned to cook without the help of family, reproducing remembered dishes with the offerings of our small-town supermarket—broccoli and spinach passing for gai lan and kong xin cai—and trying their hand at enchiladas, steak, and spaghetti. A family of five on a single salary, we rarely ate out; home cooking was nutritious and economical. My parents’ one gesture toward baking, consistent with their sense of thrift, was the purchase of a bread maker, which produced a dreaded loaf—dense with a heavy crust, that I swallowed with a helping of filial piety.

What does it mean to reclaim a culinary heritage, when one is cut off from extended family traditions? In my early adulthood, I reached reflexively for cookbooks in the American canon, beginning my self-education with cupcakes and muffins from Irma S. Rombauer’s accessible classic The Joy of Cooking, later advancing to scones and seasonal fruit galettes from activist chef Alice Waters. It was not until recently that I found my way into Taiwanese and Chinese culinary traditions. A flourishing of websites and Instagram accounts by diasporic Asian Americans offers personal stories alongside detailed illustrated recipes, making Chinese recipes accessible to English-speaking, second-generation Taiwanese-Americans like me. These resources have been an education, and a connection to a culture I never knew first-hand, filling in a cultural gulf opened by my parents’ emigration from Taiwan in the 1970s.

When the Covid-19 pandemic arrived in the United States in 2020—and white-collar workers retreated into their homes, while essential workers continued to show up for their shifts at supermarkets, meatpacking plants, and growing fields, to keep food on our tables—I baked my way through our state-mandated lockdown, at first making focaccia and flatbreads, sourdough boules and sourdough discard crumpets, ordering sacks of flour from a local mill amid a months-long flour shortage in all major supermarkets. In my quarantine kitchen, pained by the President’s anti-Asian rhetoric and the violence against Asian Americans he encouraged, I began to consider the racial valence of my baking frenzy. Thanks to food blogs, I attempted Chinese buns for the first time. Soon, shiny knots of milk bread replaced the sourdough boules; Swedish kardemummabullar moved aside for sesame-freckled pork buns.

It is hard to explain this late-arriving nostalgia for Asian breads I did not grow up with; at age 37, I am adding to my American repertoire new Asian recipes that nonetheless taste intimately familiar. It is now these sweets, and not the cinnamon roll I experienced through the umbilical cord, that I crave.

The following recipe for Chinese milk bread is a family recipe—but not mine. It is from The Woks of Life, a website created by parents Judy and Bill, with their daughters Sarah and Kaitlin, to document their family’s history through food. I have relied heavily, and gratefully, on their knowledge during the pandemic. 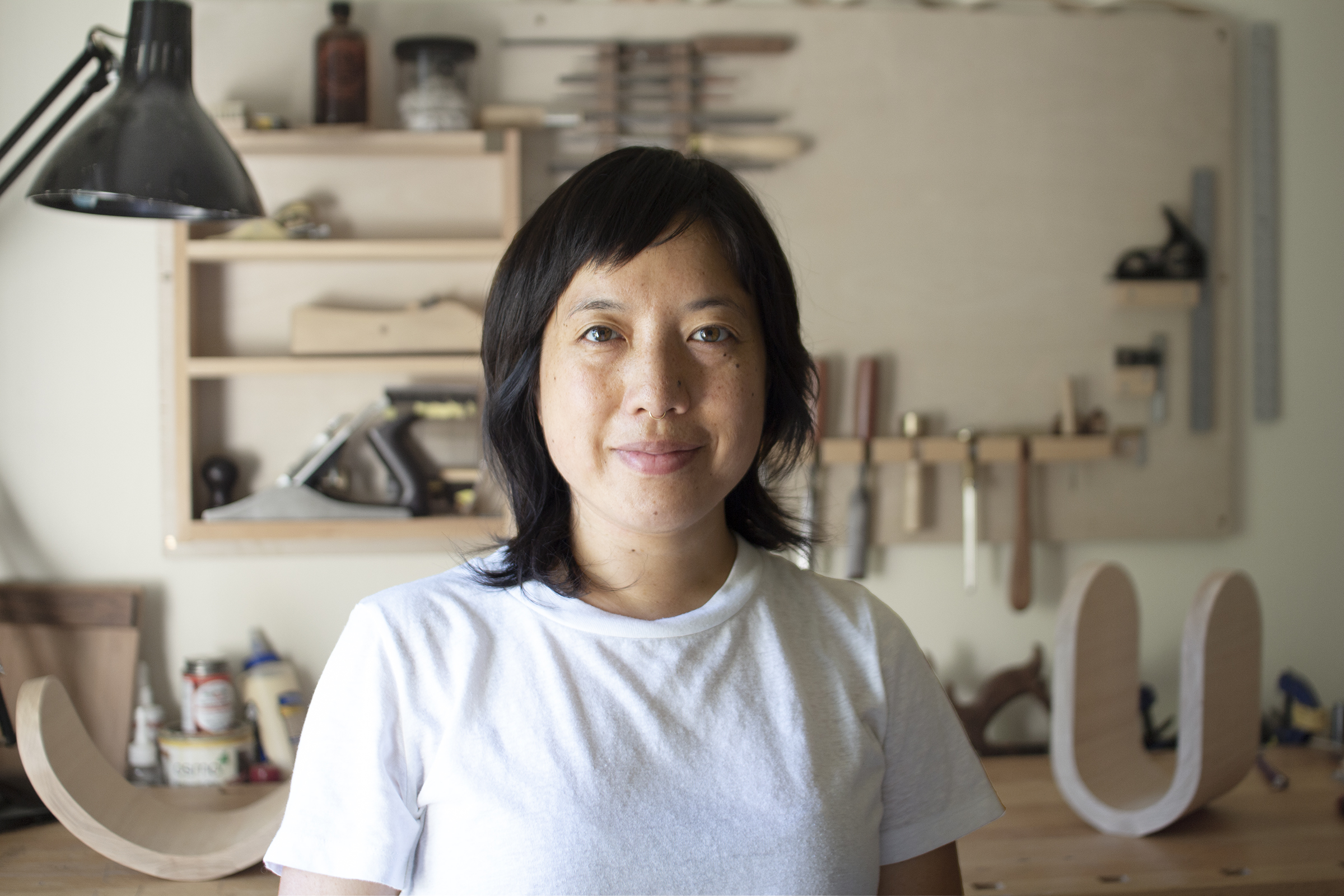 Phoebe Kuo is a studio woodworker from San Francisco, CA, currently based in Oakland,CA, who makes site-specific sculpture using traditional furnituremaking techniques. She also teaches and practices design research. Born in Lompoc, CA, to Taiwanese-American mathematicians, Phoebe grew up navigating hybrid identities, which she continues to explore as a queer artist of color. Her taste for baked goods is similarly hybridized; forays into Asian pastry have not dampened her enthusiasm for yellow box cake with chocolate frosting. She earned her BS in Product Design from Stanford University and an MFA in Design from Cranbrook Academy of Art. www.phoebekuo.com

“I’m a Pepper, you’re a Pepper, wouldn’t you like to be a Pepper, too” Chicago/LA kalbi marinade/serenade and Trader Vic’s Mai Tai

“I’m a Pepper, you’re a
Pepper, wouldn’t you like to
be a Pepper, too” Chicago/LA
kalbi marinade/serenade and
Trader Vic’s Mai Tai